From the start of the dream to now.

The start of the adventure?
Indeed - well you may well ask....
But to start where - That is the question?

It's a long story and the "Alpine Settler"  part began I suppose way back in 1964. On my birthday to be more precise and to remember it all now, if nothing else, goes to prove that while the body and mind may well deteriorate over the years - these dear memories will indeed go on for ever!. Yes this is where and when my plans began for my future life in Italy. The first meeting between us was in the Hotel Bel Mare - not quite as modern as it looks here, but still almost the same  - apart from balconies (there weren't any in the 1960's...).

I clearly remember the night when this photo was taken at a night club in Rimini. It was my very first date with this 'romantic' Italian - he was truly 'to die for'. My first meeting him with him went like this..It was my birthday, and as had become the norm, it was spent in a small family run hotel in Rimini which my parents and I had been visiting for a number of years. We always celebrated with the hotel owners family and a German couple who were there every year too - 'our party' beginning after the evening meal and when all other guests had gone out. On this particular night, one chap - a Milanese friend of the 'hotel family' had arrived late and ate his meal alone in the empty restaurant. By the time he had finished and slowly wandered towards our group we were - shall we say - in good spirits. He stopped and 'saluted' his friends (the owners) and was politely introduced to our party. The silly s*d didn't know how to say Happy Birthday in English to me, so he just smiled and said something that sounded like 'Merry Crissman'....at which point my father said, passing him a glass of bubbly, "Oh for heavens sake - take this drink and join us!" He didn't need telling twice  . Well - long story short - he asked me out for the following night. Ha ha... I told him "Sorry - got a date already for tomorrow!" (those were the days - I'm tellin' ya...).Well the following evening after dinner I'm waiting for my date to arrive to collect me.... but instead 'Rosella' the daughter of the hotel owner approached me and asked if I was waiting for someone? On the affirmative, she burst out laughing and said "Well I wouldn't bother. Signor Bruno has just stopped him from coming in and told him to 'clear off' as you are his date tonight!"

Romantic - or what? He (Bruno)
then took me to the club where the above photo was taken..... Needless to say - that particular holiday was very special for us both! One of those 'Golden Memories' that I still treasure.

Over that holiday we began to get to know each other and it became clear that this wasn't going to be 'just another holiday romance'. There was a special spark there right from the start.
We visited San Marino

and in addition we had a wonderful day out at the trotting races at Cesena.

Honest  to goodness, I'd never seen anything quite as exciting before in my life. The speed at which these horses travel and their proximity with the others is breathtaking. We saw a couple of 'tumbles' that day, though it seemed that the horses were OK.  I seem to remember that we did place a couple of small bets but I really can't remember if we won or not.  I know that we didn't get back to the hotel until half way through dinner, but the family made sure we were not left out.


The family at the hotel were really nice and we had been their guests for a number of years and Bruno's family were friends of their family. Their two children, who were about my age were named Rosella and Sergio, and Bruno and I decided that our first child would be named after one or the other - hence N0. 1 Son named Sergio.... We decided during this holiday that I would return to Italy to meet his family and this was arranged for that coming Christmas! Now that was a terrifying experience - I kid you not. Put yourself in my shoes - my command of the Italian language at that point allowed for me to tell a garage that the tyre on my car was flat, I could order a capuccino, say 'grazie' and 'per piacere' but I was still struggling with the pronunciation of such 'horrors' as SDRAIO, GNOCCHI and CUCCHIAINO (Go on - try and say them fast - I dare you!).


But the day arrived I was met at the Stazione Centrale in Milano, having travelled down from Dieppe by 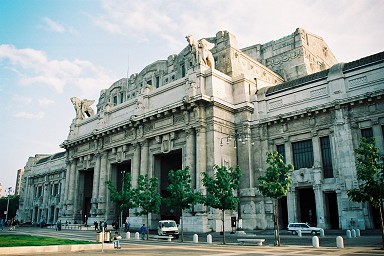 train. I was a seasoned European rail traveller by now due to the many holidays spent in Italy before. But the Stazione Centrale had only ever been a short stop where there was just time to buy things from the platform vendors (food, drink, gifts etc.).

I had never actually seen the station - It was a revelation - Victoria, Euston and Brighton

'eat your hearts out'!

The inside too was just so impressive. Little has changed since then. The escalators were there  then and there was even (I found out later) a place where for a few lira a traveller could hire, on a time basis,  the equivalent of a  'private en suite' bathroom. Included in the price were pre-packed sterilised cotton towels, comb and shaving equipment for the men, plus soap, shampoo, and talcum powder (good old 'Roberts and Roberts'!).

Take a look at this